My husband LOVES surprises!  Me,...not so much!  I'm just not wild about the idea of someone knowing something before I do!  This morning I climbed out of bed to face a trashed kitchen...  My kitchen is tiny!  (Did I mention how small my kitchen is?)  Counter space is limited, to say the least...Certainly not enough to contain the disaster Memorial Day's cook out made (Wait a minute... How can cooking outside possibly create this mess inside???).  Back to my point--  Somewhere buried beneath the piles was an unpacked bag of goodies!  It seems that the "surprises" my husband picked up during his quick trip to the grocery store got lost there...  I sneaked a peak! 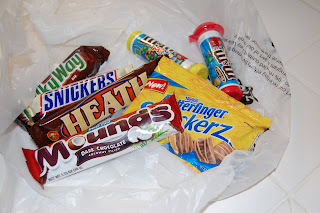 There I found a "surprise" for every one of us... chosen carefully according to each of our likes and dislikes!  The Mound's- that was for me!  How do I know?  Because Doug knows that I love them!  And the little M&M's- Those are for Kate and Ellie!  Doug knows they love the containers and the candy inside... Each "gift" chosen specifically for every one of us!... even our new "daughter-in-love"!  (No wonder he was gone for so long!)  It warmed my heart to picture him at the check out counter choosing his "surprises" so carefully and it reminded me again just why I fell in love with this guy!  It thrills his heart to deliver joy to the people he loves!  And when I think of it that way... I've decided that maybe I like surprises after all!

Since we're being so honest, I'm going to admit something else about myself in addition to the fact that I love Mounds Bars!  This "something else" is another one of those things that Doug has always known about me!  As much as I loved my first born boy---  I wanted a GIRL!  (I can't believe I really just typed that!)  I'd dreamed my entire life of long hair and ponytails, frilly dresses and dancing lessons.  I don't deserve anything- that is clear- but for a little girl, I BEGGED the Lord!  Doug and I "tried" to get pregnant for months and months, with no success.  We prayed together--- We dreamed together--- We even named her together.  (did you catch that?.... her!)  Late one night Doug woke me up and announced that tonight was THE night!  Sounds suspicious, doesn't it?  That's what I thought too!  But He said that he felt that God had woken him up and I should follow his lead...  So I did!... What can I say?  I was desperate!

Doug was a Marine Harrier instructor pilot in those days and every morning he passed the base hospital on his way to work.  Two weeks after the fateful night that he claimed to have "heard from God", he collected my urine specimen and dropped it off at the clinic for our long awaited (it had been a long two weeks!) pregnancy test.  The clinic informed him that we (more specifically - me - the owner of the specimen) could call at 2 PM that afternoon for the results.  I would simply need to provide my social security number and the results would be mine!  But, my surprise loving husband had other ideas...

Doug called home before he took off to tell me that we could call the clinic at 4PM for the results. I should wait until he got home and we could call "together"!  (right!)  He searched the "ready room" for a friendly female Marine and somehow convinced her to call the clinic at 2PM (in the middle of his flight!), "pose" as Lori McCary, supply my social security number, and get the coveted results we were waiting for.  She went along with this covert activity and after calling the clinic as instructed, she radioed Doug in his jet.... "Congratulations Captain McCary," she said.  "You're pregnant!"   I honestly don't know how Doug landed his jet that day!  He did, of course, and he hurried home before 4 PM to announce the happy news!

I was pregnant!...  Doug had been right after all!  And yet, I feel that I must add, for all of my female friends out there.... I was sure to tell my "man" that this would not work a second time!  :-)

The military healthcare system performed an ultrasound on me at 16 weeks, but their policy did not allow them to reveal the sex of the baby.  By the time I was given a second ultrasound by a civilian doctor just a few weeks before delivery, I opted to not know.  I'd waited this long...  I'd save that for another SURPRISE!...
Posted by Lori at 9:11 PM