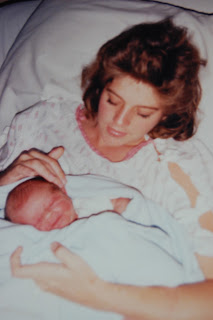 October 16, 1987 - The day I discovered immeasurably more love than I could ask or imagine! It was also the day I gave birth to my firstborn son, Russell Douglas McCary!  Never had I known love like that!  How I treasure the moments after his birth when I was left alone with him for the first time.  I propped myself up on my elbow and stared down at my beautiful newborn baby lying by my side.  It was all like a dream and I didn't ever want to wake up!  This was a moment I had wondered about for so many years... Would there be shame and guilt instead of joy?  Would this be a moment of regret or hope?  The answer to my wondering overwhelmed me...  I cried like a baby!  But they weren't tears of shame... or guilt... or regret.  They were tears of absolute joy!  God's love had been expressed to me in the very place of my failure.  When I looked at my son for the first time... I saw forgiveness.  And I felt love!... for the gift of new life God had given-- not only in the form of my son, but more importantly in the form of HIS!  What kind of love gives so lavishly to the least deserving?  What kind of love meets us at our point of desperate need and gives EVERYTHING for us?  Jesus paid the price for my terrible choices and now offers me life instead of what I truly deserve!

I could hardly wrap my arms around such a truth!  But a few months later, the Lord gave me another beautiful illustration of the depths of His love...  Russ was just 8 weeks old the day Doug and I went out to shop for a few last minute Christmas gifts.  I saw an old man in a wheel chair near the entrance of the store. He didn't have any legs, but tucked in his lap was a can where he held the money he collected from begging.  He was filthy!  His overgrown beard covered his dirty face and his hands and fingernails... (well, I think you get the picture!)    I was repulsed!  I was carrying my precious, 8 week old bundle, wrapped in a crisp white blanket...  I took the long way around to the entrance of the store, simply to avoid him.  In all honesty... I was also trying to avoid the voice inside of me that was prompting me to go talk to him.  There was no way I was taking my baby anywhere near that nasty old man!  God would have to ask someone else...

I had a miserable shopping experience that day!  It seemed that little voice followed me all over the store!  "But Lord... my baby is so young; so vulnerable... that man is filthy!... no telling what kind of diseases he might be carrying... and besides, I don't have any money to give him... you know how we're hurting financially this year... "   I hoped beyond hope that he would be gone by the time we left the store!  He wasn't!  Now what?  I fixed my eyes straight ahead and walked right past him toward our car.  But by the time I got there, I was so miserable, I couldn't stand it anymore!  Just as I reached the car, I did an "about-face" and headed back toward him.  Doug looked at me like I was crazy!  I blurted out something like..."I don't know why, but I have to go talk to that old man!"  So with baby wrapped tightly (very tightly!) in my arms, I headed back across the parking lot toward him. 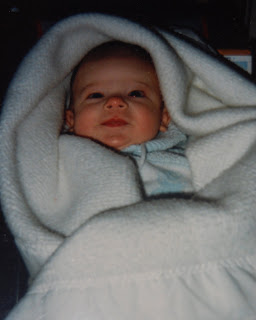 I think he saw me coming from across the parking lot!  He started calling out to me before I was even close enough to hear...  "Please, Ma'am!" he said, "I don't want your money! But could I please just hold your baby?"  Excuse me?  WHAT did you say?  You want to hold my baby???  I don't think so!  I'd give you a million dollars before I'd let you hold my baby!... But that same voice whispered in my ear.  "Let him hold your baby..."
Before I even realized what I was doing, I lowered my precious baby boy into his outstretched arms.  And as I did, the old man began to cry.  He pulled my baby in close to his chest and hunched his body over him to gaze into his little eyes.  His tears fell from his own face onto Russ' and as he wiped them away with his filthy hands, he began to pray.  He thanked God for his precious life and he begged the Lord to protect him and use him mightily for the Kingdom....  Then slowly, with a most tender look on his face, he lifted Russ back into my arms and said "Thank you!"

As I stood there and looked at that old man holding my precious son... I saw myself!  Yes, I am a lot like the Velveteen Rabbit, and I am even more like my Baby Drowsy, but I am EXACTLY like that old man!  I am torn and broken, filthy with sin, and as repulsive as I'd found this man to be.  I wondered then, and a million times since then, if God felt just a little the way I felt that day--- the day He decided to lay his own, precious, innocent son into my filthy arms as a gift!?  And suddenly I realized, like only a new mother could, what an incredible gift He had given for me!  I can't begin to find a fitting response... so I simply lift my face to Him and seek to humbly say "Thank you" with my life...
Posted by Lori at 9:25 PM