The Lord often has a funny way of revealing Himself to us.  As a young mom, He used a children's book to teach me an incredible truth...  I "stumbled" across a beautifully illustrated copy of "The Velveteen Rabbit" when my oldest son was only a few years old.  Since then I've shared "Velvy's" story more times than I can count,  I have a copy on display in my home, and I've purchased as many as I could get my hands on to give away...
I guess I love the velveteen rabbit because he reminds me so much of myself!... 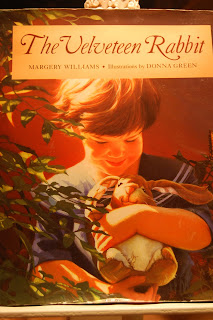 The story begins on Christmas morning... that magical day of the year.  Little Tommy was just 3 years old.  A little bunny named "Velvy" was nestled in the top of his stocking, waiting expectantly to meet him.  Tommy saw him as soon as he came down the stairs.  He ran over and scooped him up... hugging him close to his warm cheek and whispering in his ear..."I love you!"
"So this is how it feels to be loved!" Velvy thought.  He had waited for this moment for so long!  Velvy knew that there was nothing particularly special about him... He wasn't even real velvet... he was velveteen!  And he didn't even have real hind legs like some of the other bunnies, but he longed to be loved- to be really loved!  The little boy's love did feel wonderful, better than he had ever imagined!  But sadly, other toys and Christmas surprises captured Tommy's attention and after just a few incredibly wonderful moments, Velvy was put aside and later placed on the nursery shelf with all of the other toys.  Now that he had finally experienced this thing called "love", he felt lonelier than ever...waiting there!  There was a wise old skin horse who had been there for a long time.  Velvy had so many questions... so many longings! He just had to ask---
"What is real?"  asked the rabbit one day, when they were lying side by side near the nursery fender, before Nana came to tidy the room.  "Does it mean having things that buzz inside you and a stick-out handle?"  Horse.  "It's a thing that happens to you.  When a child loves you for a long, long time, not just to play with, but REALLY loves you, then you become Real."
"Does it hurt?" asked the Rabbit.
"Sometimes," said the Skin Horse, for he was always truthful.  "When you are Real you don't mind being hurt."
"Does it happen all at once, like being wound up," he asked, "or bit by bit?"
"It doesn't happen all at once," said the Skin Horse.  "You become.  It takes a long time.  That's why it doesn't often happen to people who break easily, or have sharp edges, or who have to be carefully kept.  Generally, by the time you are Real, most of your hair has been loved off, and your eyes drop out and you get loose in the joints and very shabby.  But these things don't matter at all, because once you are Real you can't be ugly, except to the people who don't understand."

Like Velvy, I long to be "real" too!  I long to be cherished for who I am... loved just the way I am... in spite of myself!  But, I too, have discovered that I am not very special or unique either.  I'm not near as perfect, or pretty, as I'd like to be.  And I've wondered so many times... how in the world could anyone ever love me just the way I am?
I finally realized that, in the end, what made the Velveteen Rabbit special was not what HE had to offer!... Instead, what made him special, (what made him real) was the love of the little boy!
I grew up and eventually discovered a love like that too!  And I found out what it meant to be real!  And like Velvy, I also found out that I was special, not because of anything I had to offer.  I was made special by the man who loved me.... That man was Jesus Christ--- the love of my life! 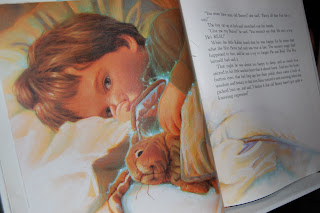