The right to choose... 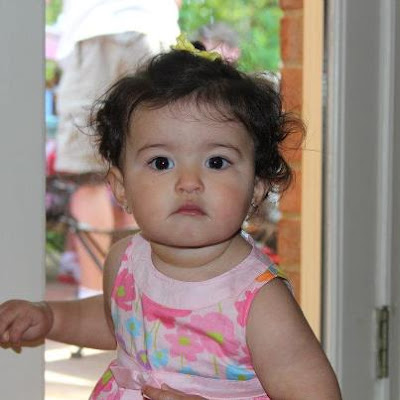 Samantha is 17 months old... precious beyond words... deeply loved by her mother, by her father, by her grandparents, aunts and uncles.  Somehow she slipped outside to the back yard without anyone noticing... and fell into the family pool.  For several days she laid in a hospital bed, clinging to life by a thread.
Prayer warriors were enlisted across the country to pray for her... I was one of them.  How I begged God on behalf of this precious little girl, but mostly on behalf of her heart-broken, grief stricken parents.  Sadly, though, after a valiant battle of many days, Samatha died.

I wanted to vomit.  I wanted to lay prostrate on the floor and wail... "Why God?"  How do her young parents reconcile such a tragedy?  I didn't know Samantha, nor do I know her parents.  I am linked to her only by a friend of the family.  But it felt so real to me... like an all too familiar nightmare that had come true.  I couldn't shake the haunting thoughts of grief and agony I am certain I would be feeling were she mine!  I simply could NOT even imagine it!
Nor could I shake the reality that as this devestating news was arriving on my computer screen, a hopeful Mom, like me, was rejoicing in the news that her child was to receive the gift of life that could have only come through this precious child's death.  Thoughts and emotions raced through my heart and mind... crashing into one another.  How can I reconcile the truth that I am avoiding?  For Rachel to have life, another precious child like Samantha will have to die.  My personal grief will only be averted through the grief of someone else.  Someone like the Mom I am crying for tonight.
I am tempted to let my imagination take me to places I simply can not allow myself to go...  Because, as I learned from the writings of Elisabeth Elliot so many years ago,  "God does not supply grace for our imagination."  Rather His all-sufficient grace will be available for my every need, at the very moment I need it!  I have a choice to make.  Will I choose to go to places in my heart and mind without the grace of God to meet me there?  Or will I choose joy for today, knowing that His perfect grace will meet me in that place when I need Him most?

Early in our marriage, Doug was a U.S. Marine Corps jet pilot.  He flew the AV8-B, known to most people as the Harrier.  But wives of Harrier pilots knew the jet by another name... "The Widow Maker".  Shortly after Doug finished training in the Harrier, he had an accident, that except through God's mercy, would have left me a widow with a 5 week old newborn son.  While flying on a low level flight over the bayous of Louisiana, going over 400 miles per hour, a turkey buzzard crashed through the windscreen of Doug's jet, half of it hitting his upper left arm and chest, and the other half sucking into the engine of the plane.  His left arm (coincidentally the one used to land the jet!) was paralyzed from the impact.  Doug has little memory of those moments inside the shattered cockpit of his Harrier and almost no recollection of landing the plane.  He simply remembers a few snapshot thoughts between he and God and then waking up in the Emergency Room of an Air Force base in southern Mississippi.
I remember clearly getting "the" phone call at home more than a thousand miles away.  Those were the days before cell phones and even caller ID, so I had no idea who was calling when I picked up the phone that afternoon.  Imagine my surprise to hear Doug's squadron commander on the other end of the line.  Immediately I knew that this was not an everyday phone call!
My mind began to race!  Something has happened!  But Doug must still be alive or a black car would be at my curb and this gentleman would be at my front door... not on the other end of this phone call!  He must have read my racing thoughts and quickly assured me that Doug was alive and being attended to at the Air Force base where he managed to land the plane.  Doug would call home as soon as he was able.  In the meantime, I was to pack and be ready to catch a flight to Mississippi the following day.  I anxiously waited next to the phone for what seemed like an eternity...  Finally it rang!  I could hear Doug's voice on the other end, and I breathed a very heavy sigh of relief!  He didn't really sound like himself, but he said that they were simply "checking him out" and then they would release him... He guessed he would be out of there in 30 minutes and would call back then.  I waited...  3:30 PM...  6:30 PM...  9:30 PM...  12:30 AM...  STILL waiting!  His "30 minutes" had turned into hours and hours without a word from Mississippi.  I was quickly becoming beside myself!!!  Somehow I found a phone number for the Air Force base and begged the poor soul on the other end to connect me to the base hospital Emergency Room.  "I'm sorry, Ma'am",  the ER tech said, "We don't have a Captain McCary here.... He was sent up to ICU hours ago!  You can call the main switchboard tomorrow morning and they can connect you to an ICU nurse...."   Click.  She was gone.  I was alone at home with my 5 week old baby.  I flopped myself across the twin-sized bed in the nursery and I sobbed!  I had no idea what was happening more than a thousand miles away and I wouldn't until morning!  It was fertile ground for my imagination... and all my fears were suddenly bigger than life!  I had little strength in those days to resist the pull of my imagination, and I quickly discovered what a miserable wreck I could be when I refused to wait upon the Lord to catch up to my "reality" with His grace!  None of my imaginations proved to be true... Doug would be released from the hospital shortly after I finally arrived and would even return to flying a few months later.  There was a lesson for me in that night of agony, but sadly, I missed it!
I became quite experienced at avoiding my fears, but one night several years later, following the death of a close friend in the Harrier, I let my imagination go wild!  Doug was on a night training flight.  I had two small children at that point and they were finally tucked in for the night.  I climbed into my own bed, exhausted.  But as I laid there, in the dark, I felt strangely alone.  What would I do, I wondered, if I lost Doug?  Where would I go?  How would I pay the bills?  Would I remarry?  How would I raise my children alone?  My imagination took over from there and I literally worked myself into an emotional frenzy.  If Doug had walked in from his flight at that precise moment, he would have discovered a pathetic, sobbing wife who was literally attending his funeral in her imagination!  But in that moment, God in His goodness, somehow swept into my dreaded imaginations and removed me from them.  And like a fly on the wall, I could see myself!  I could see the upsurdity of it all.  NOTHING had been gained!  All joy had been sucked from my life and I was left alone, trying to figure out how I would make life work, IF my fears were ever realized.  What an embarassment it is to look back on that scene and have a sobering reminder of what my heart looks like when I choose to imagine life devoid of God's grace.  Once again, I had forgotten that "God does not supply grace for our imagination".  Would I choose a life of joy today and trust Him with the grace I need for all the "IF"s of tomorrow?

In the past few years, some of my greatest fears have actually become a reality.  I would be lying if I said it had been easy.  It has been, in fact, HARD!  Tears of great sorrow have been shed and at times I literally groan for the restoration only God can bring.  And yet I sense God nearer than ever before!  I am filled with unexplainable JOY! 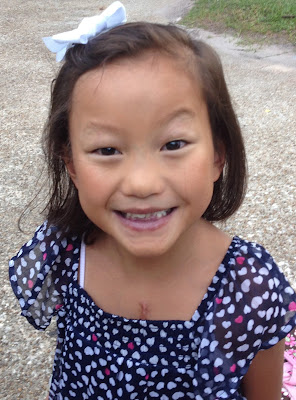 How surprising that, in the midst of it all, God laid the adoption of Rachel on our hearts.  Would we willingly choose to look our fears in the face and bring home a dying child from China, with absolutely no guarantee of a "happy" ending?  And now, a whole year later, we are still praying and wondering if God will bring a new heart in time to save our Rachel or if He will be more glorified in taking her home instead?  I don't have the answers to any of my questions yet. But every day is a sweet gift and in the midst of overwhelming joy, I don't have a desperate need to know what lies ahead anymore.  I am simply a woman completely convinced that God's grace is fully sufficient for me and will be supplied exactly when I need it!  And since God does not supply grace for my imagination, I make a choice daily to not go there.  Why would I want to allow the enemy to steal joy from today through my fears of tomorrow? God will already be there when and IF I arrive!  If I carry tomorrow's burden of pain today, will it make the burden lighter tomorrow?  Obviously not!  But Christ will be there tomorrow to help me carry it!  So, for today....  I will choose JOY instead!