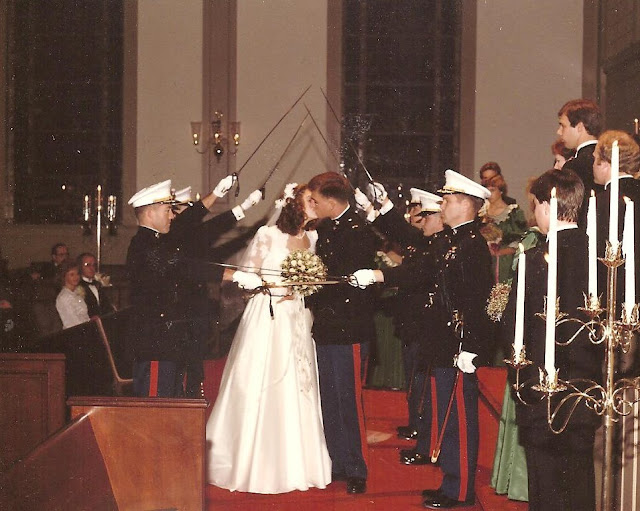 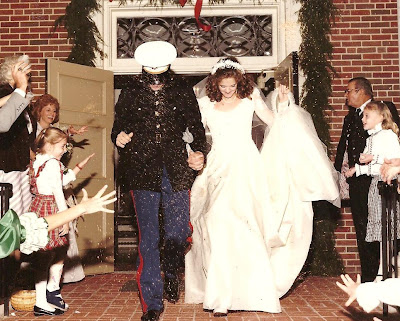 Yesterday Doug and I celebrated 29 years of marriage!   That means a lot of things, including more than our share of ups and downs, and bumps and bruises along the way.  But mostly it means that 29 years are now a part of our history together!  And today?      ...A new beginning!

If 29 years has proven anything, it has proven that marriage is hard!  Especially when you start at the ripe young age of 18 and 22 (well... I did turn 19 just 9 days later!)  There's little Doug and I haven't learned together!  And while growing up this way made it harder than usual at times, I wouldn't trade it for the world!  Almost our entire histories... TOGETHER!

And the best part?  We are still deeply in love!  Doug is my best friend... the person I'd rather spend my days with than anyone else on the planet!  I have a plaque that has been hanging in our home since the very beginning and last night when I opened the note from Doug, attached to my beautiful roses, I found those words there...  "Happiness is being married to your best friend!"  How wonderfully, miraculously true!  I wondered as I just typed that word if I was overstating the "miracle" of our relationship, but I instantly decided that I was not!  To still "feel" very much in love and committed as best friends after the 29 years we just traveled?  A miracle indeed! 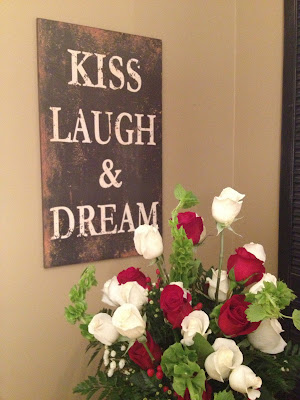 It took me a long time to figure out the secret to the special relationship we share, because neither of us have proven to be Mr or Mrs "Right"!  Far from it!  In fact, I'm certain we've both done far more wrong than right!  And were our love dependent on some measure of perfection from either of us, it would have been over a long time ago!  Last night I posted a picture of the beautiful flowers Doug gave me in celebration of our 29 years in front of these words...

We've done our fair share of all three and they are an everyday part of our special friendship.  But more important than any of those things combined is the foundation of Jesus.  That sounds like the biggest wedding cliche' of all time!  But with Jesus at the center of it all, there lies a foundation of love and forgiveness that wouldn't be possible without Him.

My oldest sister is a college professor and recently obtained her Doctorate of Philosophy in Communication.  In the process, she published some research that she had done on the subject of "Forgiveness".  She found and interviewed at length several couples that had married, divorced, and then ultimately ended up remarrying one another.  The premise is obvious.  What could possibly make two people, that had ended a once hope-filled marriage now filled with irreconcilable differences, return to one another with the hopes of a different outcome??  The only answer is forgiveness!  Somewhere along the way, these men and women decided to forgive one another and begin again!

Therein lies the elusive secret to a happy marriage!  Two very broken people.... capable of hurting one another more than anyone else, (and often doing so)...  deciding to forgive one another and begin again!  But this doesn't just apply to the once-married couple as they recite their vows for the second time.  This applies to every couple,... every moment,... every day,... every month,... every year that they are wed!

Doug and I are happily married today because somewhere along the way we learned how to forgive one another for being human.  We went to sleep last night forgiving the hurts of the day and woke this morning to a new beginning.  Tonight we will do the same and tomorrow?  A new beginning, of course!!!

Please don't misunderstand!  There are, for certain, plenty of wounds afflicted upon many of us by our spouses that require a very long and painful journey toward forgiveness and often do not end with the reconciliation and restoration of the relationship we longed for.  These circumstances are obviously not the ones I am referring to in this context.  Let's face it, though... many of the things that drive us to the brink of marital insanity are the petty, non-consequential, daily irritants, and selfishness inherent in all human flesh...  We must live with this broken man and he with an equally broken woman and learn that the answer to a happy existence will come, in spite of ourselves, as we each take responsibility to forgive the grievances of the day, before they pile up to an uncontrollable mess.

If you've been hanging around my blog for long, you likely know that I have a deep, deep love for the beach.... Well, not just the beach... but the treasures the beach washes ashore with every new, crashing wave.  God, in His absolute, personal love for me, picked out the home we were renting, and now have finally bought.  It is old.  It is quirky.  It is small. (way too small for a family of 8!)  But it is less than 3 blocks from some of the most beautiful beaches in America and when your toes sink into that warm Florida sand, you suddenly remember why old, quirky, and very small doesn't matter at all!!!

There is simply little else I'd rather do than spend hour, upon hour, upon hour searching the shoreline for treasures.  I look at them as sweet treasures straight from the hands of the Lord to me!  And with such an endless supply at God's hands, this will be a pleasure I can enjoy for an entire lifetime!  How incredible is that???  There are tricks to this trade, though, that you learn as you hown your beach-combing skills.  Certain treasures (like conch shells) are commonly found during the winter months and delivered into your hands from crashing waves on a windy day.  Shark's teeth hunting demands a different kind of day all together.  Waves, with not too much wind, produce the most teeth for a happy hunt. And low tide has a way of exposing treasures you won't see the rest of the day!  All of these variables can make a relentless beach treasure comber crazy!!! 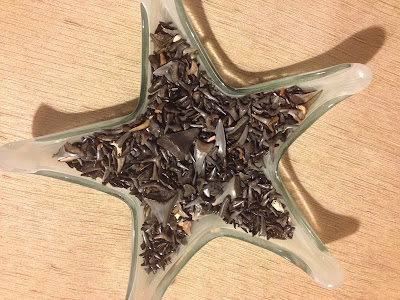 One day a friend texted from the beach and said it was loaded with shark's teeth!  We couldn't get there fast enough!  What if too many other fanatics beat us there and found them all before we even arrived?  Hurry!  We've got to get out there and start filling our pockets!

Little did I know that on that day I would meet an old, sage, beach-hunter, who would put it all in perspective for me and give me eyes to see some truths I had somehow missed before!  She had a long-handled sifting spoon for grabbing her treasures as they came in with the tide.  Because the very first thing you must learn when looking for treasures in the ocean is that the beach is ever- changing!  Right before your eyes, with each crashing wave, the old is swept away, and a new beach is left with fresh treasures to be seized upon!  Only to be interrupted by yet another crashing wave, and beautiful new treasures... "With every wave... a brand new beach!" she'd say again and again, as she captured the prettiest treasures I'd seen, just seconds before they would have been snatched back into the sea and replaced with a different prize all together!

What a beautiful principle to apply to our lives and to our marriages!  I need not rush to the beach as if all the best treasures will be taken by the time I arrive...  Because with every crash of a new ocean wave, God is fashioning a brand new beach with unlimited treasures to be found!  This is a beautiful picture of how God has dealt so mercifully and graciously with me in spite of my sin and selfishness.... When I come to Him in my brokeness, each new wave crashes over what has been done and it is swept away into the past, revealing all that is new, along with the many beautiful treasures He has left for me to discover. A new beginning..  What will happen in between the crashing of one wave and the next?  I don't know.  But whatever it is- good or bad- it will be swept away with the next wave and I will begin with a new beach again...

As I watch God's hands move the ocean tides and constantly change the sandy shores, I get a profound and beautiful picture of the Gospel!  Through Christ, and Him alone, new beginnings are possible.  And with each new beginning, following each new failure, blessings are washed ashore to remind me that He will be there to begin again... and again... and again.  Day by day.  Moment by moment.  The forgiveness that Christ' death applies to our brokeness is just like the waves... predictable... constant... washing away the broken past, and beginning again!

I remember hearing a sermon a few years ago... "God never grows tired of new beginnings."  Sometimes this is hard for me to believe... really?  He's not fed up with me yet?  My walk on the beach gives me tangible proof that this is true!  How blessed we are to serve a God that washes the past away countless times and then, as always, provides all that is new... even filling it with the best of His treasures for us to delight in!

So, it is true in marriage more than in any other relationship of the human kind...  A breach of trust, selfishness, unkind words...  The wave crashes in, sweeping away the old, and a new beach is revealed with waiting treasures.  This cycle of forgiveness goes on and on like the tides of the mighty sea.
Broken - Forgiven - Begin again....  Broken - Forgiven - Begin again...    If I walk away from my marriage tomorrow because I can not forgive, what treasures will I miss from the new beach my forgiveness would have provided?

Forgiveness is most obviously the answer to our broken marriages!  We are most blessed when we, with our spouses, can take on the mantle of Christ in His pattern of forgiveness and apply it to our marriage relationship.  Many have chosen not to, thinking that maybe a better relationship could be forged with a different broken human.  But they have been sorely disappointed to discover that their new Mr Right needs forgiveness as much as the one before him.  Thus the cycle of forgiveness and new beginnings must begin again.  Only the name has changed, as the human condition certainly won't this side of heaven!  Forgive- Begin again- Forgive- Begin again...

When I came out of my bedroom last night, ready for an Anniversary date night with Doug, the flowers I've come to expect every year were on the table.  Stunning!  29 Roses ~11 red roses and 18 white roses!  Next year, Lord willing, there will be another white rose!  This special, most personal tradition was begun 18 years ago when I received my first of many white roses, from a very broken-hearted husband requesting "a new beginning".  He asked that we renew our vows to signify our new beginning and we did!  In that moment, 11 very broken years... were washed away.  And along the shores of our hearts... a new beginning was revealed with immeasurable treasures! 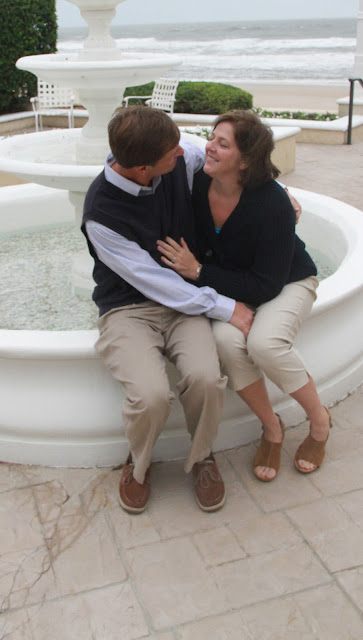