God asked me to give away a treasure last night...  I was shocked at first!  This treasure has no monetary value and it was something I felt God had given directly to me simply to delight my heart!  Now, suddenly, I was feeling nudges to give it away.  I decided that a compromise might be worth a try.  I had another treasure, much like this special one, I could give THAT one away instead...  I'd keep the best for myself.  My conscience was pricked all day...  It seemed God didn't like my compromise the way I'd hoped He would.  I was hanging on for dear life to my treasure!  Finally I decided that such a request from God was ridiculous!  Surely I'd made this whole thing up in my head from the start!  After all... who could possibly love my treasure as much as I did?  And what if the recipient didn't understand it's value or what a prized possession it was to me and they completely took it's beauty and sentimental value for granted?  No... I'd keep it!  God would understand... IF, that is, this had been His idea in the first place!!!  Still... my conscience refused to leave me alone!  Or was that God's voice I was hearing again???  URG!!!  "But I love my treasure, Lord!... What if You never give another one like it?"  What was I thinking???  If you've done any reading on this blog for very long, you should know something about me---  Saying "No" to my Lord is simply NOT an option, no matter what He asks of me!

My mind started scrolling through Bible stories where God specifically asked His people to sacrifice their "treasures".  Immediately my thoughts turned to Abraham- the Father of our faith.  In fact, the Bible says that Abraham was considered righteous because of his faith.  That faith was put to the ultimate test when God asked Abraham to sacrifice his beloved son, Isaac!!!  Such a sacrifice is unimaginable to me as a mother!  And yet, God celebrated Abraham's willingness to obey Him with the exclamation- "Now I know that you fear God, since you have not withheld your son, your only son, from Me." ... His most prized possession!  Willingly given up because he had faith that God would ultimately provide all good things for him, regardless of how the loss of his greatest blessing appeared from his limited point of view!  I felt no need to look further, since I was certain there was no greater sacrifice required of a man that could be more treasured than his own child.  The treasure that I am presently clutching is embarrassingly small in comparison!

I went into my special "nook" to pull my treasure from the perfect location where I had it beautifully displayed.  I admired it again... noticing all the beautiful details that made this particular treasure so special to me. I even considered how I might possibly get away with telling the Lord that I'd decided to go against what was now obviously His leading.

...OK!  This is quickly reaching the level of ridiculous and at this point I'm frankly embarrassed to even admit here just "what" that treasure is.  But for the sake of authenticity and complete honesty... I'll lay my pride down and cough up the truth. 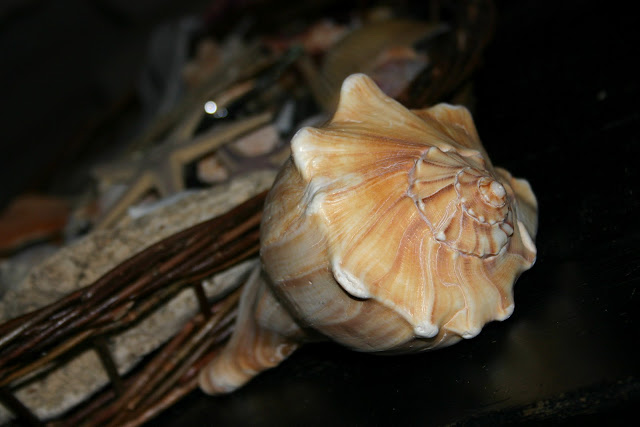 My treasure is a conch shell!  Yes... a shell from the seashore!  I know--- random and ridiculous!  I can feel your eyes rolling as you read!  But before you judge me too harshly, maybe I can explain or somehow justify myself.  Time with the Lord on the beach is beyond special for me!  There is nowhere on the planet where I feel God so near as when the two of us share life through our "talks" on the beach.  Over the years I began collecting special treasures as we walked together that came to symbolize special things that He was teaching me or leading me to do.  Many of you may remember that a feather found along the beach in 2003 was what the Lord used to begin our adoption journey to Kate.  And you could bet your life-savings that the feather from that December day is a treasure I'd most hate to part with!!!  But second only to that feather, would be the very treasure God was now asking me to bless someone else with--- my beautiful conch shell!  It had washed right up to my feet one day while I was spending some special time alone with the Lord, and I celebrated that gift from Him as if I had discovered a million dollars in a bottle.  Over the years I have delighted to find that God loves to lavish His love on us in very unique and "personal" ways.  And for this beach lover, there's hardly a better way to say "I love you!" then to wash a beautiful conch shell right up at my feet!   I danced and twirled and said "Thank you, Lord" at least a million times before hurrying back to our hotel room to show off my gift to Doug!

I've found more than a few conch shells on that very beach since that day, but none so beautiful or special as THAT ONE!  In fact, I'd gladly share one of those smaller, less treasured conches should I ever feel an occasion warranted such a gift.  But today, it seemed, God was asking me if I'd willingly part with my favorite... my treasured gift from Him.  It's rarely been so obvious that He has something to teach me about "letting go" of the things I hold dear!

I'm honestly shocked that you're still reading such silliness!  But since you are, I'm wondering if maybe I'm not alone in clinging too tightly to my special treasures.  I think that if I'm really willing to take a good look into the crevices of my heart, I'll find some sweet blessings from the hand of the Lord that I've loved so much, I am not willing to share them with anyone!  And suddenly I realize that I just might be getting to the bottom of God's message for me in all of this insane prying of my fingers from a common sea shell!!!  God blesses us, so that we might bless others!  His blessings were never intended to be hidden away on the shelves of our lives for our enjoyment alone.  Instead, He gives to us that we might give to others!  This simple truth obviously has far more reaching application than my battle with letting go of a shell!  But I'm sadly reminded by the Spirit that if I'm slow to part with things with mere sentimental value, how will I possibly part with and sacrifice things of REAL worth when He asks me to?

Just this morning at church, I sat and listened in awe once again as my hero in the Faith, John Monger, shared his testimony of persecution and torture for refusing to deny the name of Jesus.  He told of his conversion to Christ in the jungles of Bhutan as a 16 year old boy when he surrendered his heart to the Lord and promised to serve Him for the rest of his life... no matter what it cost!  Little did he know then what that promise would cost in the years ahead.  And yet, he remained strong in the power of the Lord as month after month he was tortured for his faith.  He has sacrificed more in his 20 year walk of faith then I will likely sacrifice in a lifetime.  But he literally gushes with JOY!  Even as he talks of the terrible mistreatment he suffered at the hands of unbelievers, he speaks as though he remembers it with joy!  "Glory to God!" he says again and again.  Sacrifice has become a way of life for John and it overflows from his incredible love for Jesus!  For a moment I am brave enough to glance into my own heart and am saddened to find anything there that I would not willingly sacrifice with joy out of love for Jesus.  And I realize that I have many miles to go in learning to love Him more when my struggle of the weekend is found in releasing a simple treasure found on the beaches of Florida.  But even as I blush with embarrassment, I am thankful that the Lord has not given up on me yet.  He continues to push me on to greater sacrifice so that I might know an even greater joy!  May I be quicker to release my treasures Lord, knowing that the TRUE treasure is YOU!

Earlier this weekend I had the absolute joy and privilege of participating in a gift from God to one of His servants...  It too, cost me something and I was feeling a bit proud that I had so willingly given up something of value to myself, in order to be a part of what God was doing in the life of another.  Any second thoughts I might have had in letting go of a little "extra" for myself to bless someone else, was instantly washed away when I saw the absolute delight on the recipient's face in receiving that gift of answered prayer from the Lord!  Nothing I could possibly sacrifice would EVER be able to bring the joy that giving it away for another brought!!!  If a "joy cup" can overflow... mine was bubbling over!  And yet, less than 24 hours later, I was struggling to give away a sea shell!!!  God seems to have a special way of keeping me from the pride that so easily creeps in when He allows me to somehow be a part of His love story.

I feel humbled tonight. God has done HUGE things around me and in me this weekend and I am grateful.  I am ending this day with new resolve!  I will pass on my treasure (aka: a conch shell!) to another, lest that very treasure remain in my hands as a reminder of my blessed, but very selfish, heart!  Even before I let it go... I know what I will find on the other side, as I can feel it creeping in already!  Immeasurable JOY awaits me!!  Overflowing and bubbling over!  And as I release my treasure tonight, I wait with great expectation in discovering how God will uniquely say "I love you, Lori!" tomorrow!