A Letter to Myself

I am writing today, because I know that you have struggled long and hard with all it means to be a Godly mother to the children God has entrusted to you.  Mothering is not at all the way you pictured it in the fairytale you created in your mind since you were a young girl.  But fairytales are filled with beautiful emotions and happy endings, and real life often has neither.  Most days their is not a single corner of your home that resembles the fairytale castle you created in your mind, and you somehow feel like you have failed to be anything but the evil character those tales include.  What has happened?  Where did you go wrong?  How will you have anything at the end of your story to offer back to God as a sweet offering that will please Him?  I'm writing to give you hope;... to encourage you!  The task God has called you to is, indeed, a HUGE one!  But nothing delights Him more than to help you accomplish this good work in His name!

First and foremost, you MUST remember that your children are a "trust" from God.  They are not yours!  They belong to God.  Always have.  Always will.  The children God has entrusted to you through adoption are His too!  They always have been.  They always will be.  In fact- the Bible says that God has an incredibly deep love for orphans.  So it is probably safe to say that His call for you to parent one of those children is a sacred trust- greater than any you could have given birth to in the flesh!  Do not buy into the lie that your adopted children were brought to you by the work of your own hands, because you "selected" them from among other children and spent your last dime to bring them home.  They too belong to God and many miracles were wrought to bring them into your heart and home - sometimes from the other side of the globe.  It's a small thing in the economy of God to plant a child in the womb of a mother and bring it to birth and home.  That, as they say, is "natural".  But to plant a child in the womb of a mother far away, protect it's life through difficult circumstances, save that child from death defying illnesses, defects, indifference, abandonment, a filthy environment, political turmoil, governmental red tape, thousands and thousands of dollars in adoption expenses to be paid by people they've never met, to whom they can never repay,... to finally be placed in YOUR arms as Mommy?  If that is not a super-natural event, there can not be one!  God's weaving hand has placed HIS children EXACTLY where He wanted them, and in this case, it was with YOU!!!   Let yourself feel the weight of that truth!  It will change you as you mother the children He has chosen just for you!!

But there is another truth that you can never ever allow yourself to forget!  When you placed your trust in Jesus Christ and began to follow him as Lord, you became His SERVANT!  Not the kind that picks and chooses it's service, but the kind that is always at her Master's bidding.  Maybe a better description of your place before the Lord is SLAVE.  Many of the early disciples rightfully described themselves as such, or similarly chose to identify themselves as His BOND SERVANTS.  This is a beautiful picture if you can wrap your heart and mind around it.  You are not a slave by force.  No one dragged you into this relationship against your will and demanded you serve The King.  But in following Jesus, you have become his slave by choice!!!!  You have laid aside your claim to freedom and to a self-led life, because you are convinced of the goodness and righteousness of your Master.  You are also convinced that He desires the very best for you.  Knowing that, enables you to serve Him with complete abandon.  There is nowhere else you'd rather be than with the One who loves you completely and who, in response, holds your deepest affection.

Take a deep, deep look inside!  Are you living as a bond servant of His or do you continue to assert your own rights and authority over the choices and decisions of your life?  Do you awaken with each morning and seek His direction for the day, or have you already decided the agenda for this week, this month, this year?  In your planning, have you forgotten that you are not lord anymore?

Remember Mary as a beautiful example to follow.  When the angel of the Lord appeared to her and brought news of her coming pregnancy, there is little doubt that her mind raced with the realities such an announcement would mean.  Who would believe that she was not a harlot?  Would Joseph?  Would her parents turn their backs on her too?  And if she survived the stoning prescribed by law, how would she mother a child alone?  And yet her simple words portray a beautiful trust in the Lord her God...  "I am your humble servant.  Let it be done to me as you have spoken." 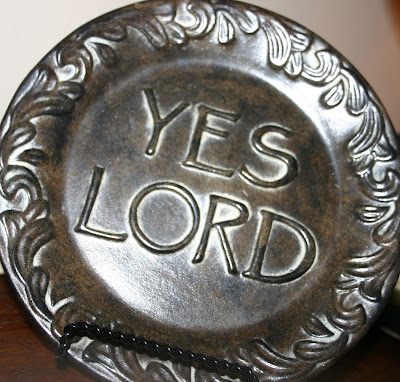 What joy there is awaiting you as you follow Him alone!  You can have sweet peace, even when you walk through dark, difficult days with your children, because you know that you are in that place only by His leading, and He will bring you through.  These are, after all, HIS children!  You just have the privilege of caring for them and leading them as you follow Him!  As His servant, you are engaged in a high and holy calling!  The outcome is His concern.  Obedience is yours.

As you remember your position as His servant in your role of mothering, you will begin to see Him in and through the monontonous, the hair-raising, and the ordinary parts of your every day.  The motivation to make life work for "self" is gone.  Now your only motivation is to please your Master with the work of your hands.

This beautiful picture of servanthood leads directly to another very important point that you would do well to not forget!   What you do with the children God has entrusted to you is of UTMOST IMPORTANCE to Him!  This too, is a fact that when you remember it, will change you as a mother!!!!     What you do with the gift God has entrusted to your care, is to be your offering to Him when He returns or He calls you home.  Mothering is a very high calling, because the "trust" left in your care is of immense value to God.  Will we be faithful servants and give our ALL as a sacrifice to the God we love or will we squander the beautiful gifts He has given us to live for ourselves instead?

In Matthew 25, Jesus tells a story, that if we listen closely enough, can hear Him talking to us as mothers....   A master was going away on a long journey.  Before he left, he entrusted his treasured possessions (talents) to the servants to care for in his absence.  To one he gave five; another two; and another just one- each according to their abilities.  After his departure, the servant with five talents, invested them and multiplied them in anticipation of his master's return.  The servant with two talents did the same.  But the servant with just one, buried the master's treasure, intending to give it back unchanged when he returned.  The master finally returns, as promised, and asks each servant to give an account of the treasures left in their care.  The first presented the five talents doubled to his master and was commended as a "good and faithful slave" and was invited into his sweet presence!   The second presented his two talents, also doubled, and received the same beautiful response from his master.  The third servant, thinking he had done his master a favor by hiding his single treasure away for safe keeping, presented it back just as he had received it.  The master was appalled that his servant had given nothing of himself to invest the treasure left with him, and declared him to be a wicked, lazy slave, sending him away from his presence forever.

If you, as a mother, were asked to take a survey of your life and name the most treasured possession the Lord has entrusted to you, would you not immediately declare the names of each and every one of your children?  Of course you would!  Why then, would you not willingly give everything you have to invest that trust, multiply it, nurture it, and protect it until your Master returns and asks you to give an account of your work on His behalf?   Don't you long to hear those sweet words as they flow from the Lord's lips to you?  "Well done, good and faithful servant!"

You will face the temptation day to day, and sometimes even moment by moment, to believe that your children are "yours" and that you will not give an account to their heavenly Father for the way you led them during their stay in your home.  Resist the urge to do so with everything you have in you!!!!  When your children awaken you in the middle of the night, or bring a thousand requests and needs to you in a single hour.... remember that you do not work for yourself or even for that child, but for the God who made him/her.  This is a child of the King!!!  How would He expect you to treat His child?  Do they have hurts that you can help heal?  Do it with His strength!  Do they have habits that irritate and drive others away?  Train them to live in a way that honors God instead.  Do they demand more than you think you have to give?  Ask yourself, "Is there anything too big to give to my Lord in response to the loving Master and Savior He is?"

Mothering in a way that pleases the Lord is HARD!  This struggle might not have been a part of your fairytale, but it is indeed a part of reality, and God intended it to be!  Nothing pleases the Lord more than a woman who is willing to die to herself and live for Christ instead and there is no better training ground in which a woman can learn death to self as much as in the role of Mother.  Determine to not fight against this beautiful time of testing and maturing in your walk with God.  If you must, repeat it to yourself as often as necessary....  "Die to self, Lori... Die to self!"  When you willingly die to yourself and your personal comforts and pleasures, you please the heart of God.  You are investing yourself- your very life- in the treasures He has entrusted into your care; multiplying them; nurturing them; caring for them.... so that when Jesus returns or calls you home, you will have a beautiful offering to present to your Lord.   The investment of yourself in the lives of the children He has entrusted to you is, and will always be, your greatest offering as a Mother.  What kind of offering will you bring?