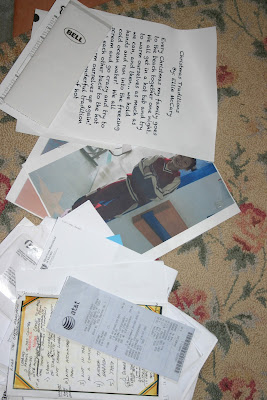 I was minding my own business yesterday, going through a year's worth of paperwork that had been begging for my attention.  From somewhere among the bills and receipts, slipped a picture I had stuffed there many, many months ago.  This was a photo that had been reproduced many times and hung in prominent places throughout our home.... the bathroom mirror; on my bedside table; and as you've probably guessed ~ front and center on the refrigerator door!  I had fallen head over heels in love with a little girl half a world away that I wanted more than just about anything to be able to call "mine"!  I was so smitten by this beautiful "stranger" that hardly a moment went by without my thoughts somehow returning to her sweet face and my dreams of being the mommy she so desperately needed as a 9 year old orphaned girl.  This little girl had done more to stimulate my prayer life than almost anything else I can remember.  I was beyond certain that God had chosen her just for me and was hardly daunted when we discovered she had been matched with another family instead of ours.  If I slept at all following that devastating news, I don't remember it.  I recall only battles in prayer for God to move mountains and bring her back to our family.

It was absolutely impossible that the family matched with "my" girl could possibly love her the way I already did....   Every time the telephone rang or an Email announced it's arrival in my inbox, I would leap from my chair, convinced word had finally arrived from the adoption agency declaring what I already knew... She was mine!!!  A week, then 10 days passed without a single call or Email.  All hope was dwindling... and fast!  Why God?  Why would you even allow my heart to be pulled so completely into a place with no hope of fulfillment?  How could you allow even Doug to surprise me and agree to adopt this precious girl, only to take her away?  It seemed a futile exercise that almost seemed like an act of cruelty on my fragile emotions!  The only reconciliation I could find in the matter was in believing that God did, indeed, have a child for us... but a different one than the one I had already given my heart so completely to!  Out of utter disappointment, I made myself begin to look at several others of the 150,000,000 orphans needing a home.  One caught my eye again and again, but the words "critical medical needs" were all I needed to pass straight by and take a look at others with far less dire needs.

It's rare that I sense God saying something so clearly that I am compelled to listen and act upon it or risk the consequences of flat out disobedience.  But that day was one of those days-- and I knew beyond a shadow of a doubt what God was asking me to do...  You've got it! - Make a call and look at the files of that critically ill child...  There was an almost literal physical battle that took place in getting my reluctant body out of the recliner and in front of my computer.  And, almost as if against my own will, I dialed the phone number to the adoption agency and asked them to lock her file!  The voice on the other end seemed surprised that I was asking about this particular child... "Are you aware that this child is considered "terminal"?  Doctors that treated her as a baby decided that she was "inoperable".  We want to be sure that you are fully aware of this child's critical needs..."

The Spirit of God took over from there and before I knew it, I had the Emailed files right in front of me staring back from my computer screen!  I immediately took my computer, filled with scary diagnosis' and prognosis' and laid them before Doug...  What were we to do?  I think we both knew the answer before the question passed through my lips.  Neither of us could bear the thought of this precious child dying alone in an orphanage.  We were to bring her home, pray for healing, and be grateful for each day, regardless of the outcome.  D.O.N.E.!  I've never been more scared... or sure... of anything in my entire life!

What I didn't know at the time was that while I was securing the files of this dying child, my cell phone was ringing in the bottom of my purse!  It was the call I'd waited 10 days for!  "My" healthy 9 year old was available for adoption once again and could be mine if I still wanted her!  "WANTED HER"? Are you kidding me??? I honestly have wanted few things in my life as intensely as I wanted HER!  Doug took one look at me and read my mind... We would adopt BOTH of them!    Not so fast!!  Two children with two different agencies is not a good thing!  Especially if one of those agencies refuses to "share" a file with the other.  We had a choice to make and it proved to be one of the more difficult decisions I've had to make in my lifetime!

The tug of war between that which my heart cried for and the direction of the Spirit of God made for a very long weekend of decision making!  How is it humanly possible to make a choice between sickness and health?  Life and death?  The answer seemed obvious on Friday afternoon.  By Sunday night, God's answer wasn't at all what we had expected, but it was sure... unanimous... unquestionable.  We were to extend hope to the hopeless and trust God with the outcome.  "Choose" sickness... "choose" the likelihood that we would experience great loss through the death of a child... "our" child!  I had already cried a river of tears in losing that precious 9 year old girl once.  This time... I would release her files as an act of my will and trust that God had something better in mind... 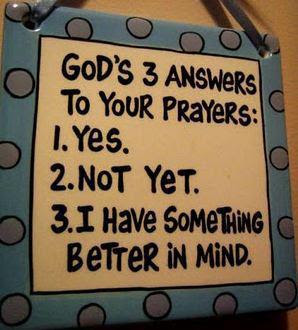 I'd cried enough tears over the loss of a child that was never really even mine!  It was time to let go and accept God's final answer on the matter.  His "no" meant that it was time to bring myself to remove the many photos I had hung around our home with such hope only a few months earlier.  Those photos found their way to the pile I was now finally trying to purge from the shelves of our office!  One glance of that sweet face, and my stomach did a complete somersault, followed by a second.  I quickly relegated them to the pile full of things I just didn't know what to do with...  I certainly couldn't throw them away!  But I realized from my surprising reaction that I am not yet to the place where I can bear looking at those photos on a daily basis either.  It's been almost a year since the first sight of that face took my breath away as it did today and if I am really honest, I have to admit that I still struggle deeply with God's "NO" when I so desperately wanted a "YES!"

I obviously had some things I needed to talk to the Lord about!  I had barely shut the door and lowered my head in prayer when the tears came... We're not talking dainty, feminine tears here!  We're talkin' full out wailing; sobbing; snot flying; crying!!!  I had wanted her to be mine and I needed to clear the air between the Lord and me!  If I really believe that you are good and that you can be trusted with the minute' details of my life, Lord... why do I still hurt so deeply?  My tears betrayed my heart and I was suddenly revolted by my utter lack of trust in the God who has proven His love to me in so many ways, it would be impossible to count them all!  I'm embarrassed, Lord, that I am slow to really believe that your "no" means that you have something better in mind!

Even as my tears sting my cheeks in thinking of the child I lost, my thoughts turn to Rachel- the child I "found".  I love that precious little girl with emotions I didn't know resided within my heart.  And if given the choice again- even with hindsight and all the pain clearly ahead- I'd do it again in a heart beat!  But so many unknowns still lie ahead for Rachel.  Doug was the first to be brave enough to give voice to the many fears and questions we share...  "Lor,"  he said into the dark of our bedroom late one night,  "Do you ever think about losing her?"  The question took my breath away...  Yes, I'd been thinking about that a lot lately.  Somehow thoughts about such things seemed a lot more bearable when viewed from a file on a computer screen.  We would love her... for whatever time the Lord would give.  Sounds holy and good...  But now we're not just talking about a little girl a half a world away, but the precious little girl sound asleep down the hall.  We LOVE her!... DEEPLY!  And either of us would give our very lives so that she could live!  She's so much more than facts on a page... She's our daughter!  Can we trust God HERE?  What if our cries on her behalf are answered with "I have something better in mind" and that something better means that we lose her too???  Can I trust the Lord even when His answers make no sense at all?  When His "no" doesn't mean He has a different child for us, but one less to love and raise as our own?

I long for the day when my heart will bend more readily toward His will over my own.  Oh, for the grace to trust Him more, regardless of His answers!  May He be glorified through my response not only when His answer is "YES", or "NOT NOW", but most especially when He answers "I have SOMETHING BETTER"...
Posted by Lori at 9:29 PM